Loco is proud have been chosen for the fifth year running to edit the on-screen content for the Amnesty International UK Media Awards. Loco’s Jon Davey and Arlene Dignam worked closely with Louise Stevens, producer and events organiser from Ballistic Events. Jon Davey created opening title animation and compiled excerpts from the short-listed nominations for the awards ceremony. The nominated pieces feature international stories as well as those from within the UK and cover a range of media including television, magazines, radio, and web. 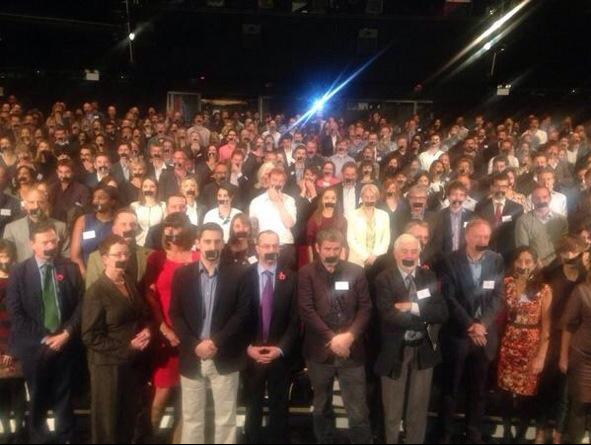 The Amnesty International Media Awards were established in 1992 to honour human rights journalists who have made a significant contribution to the UK public’s understanding of human rights issues. This year’s event called special attention to the three Al Jazeera journalists, Baher Mohamed, Mohamed Fahmy and Peter Greste who are imprisoned in Egypt. During the awards, the audience formed a silent protest by covering their mouths with black tape to join in solidarity with the imprisoned journalists.

The 2014 awards ceremony was presented by Channel 4 News International Editor, Lindsey Hilsum on 11 November at the BFI Southbank. You can visit the Amnesty International website to view the shortlisted entries.